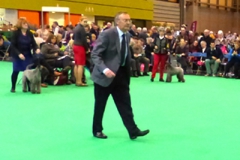 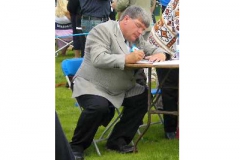 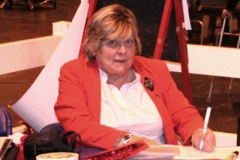 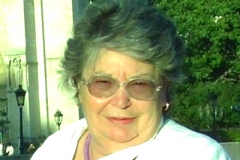 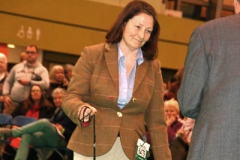 President: Mr Eion Jones ‘Congratulations on the new website I am sure it will help to promote our breed. It is a nice eye catching site, well done.’

Chairman: Mr Anthony (Tony) Salmon – please see Tony’s and his good wife Lyndia’s intro which applies to Lyndia too as longstanding Treasurer, ‘Tony and myself, we started in Kerries in the early 1980’s, we bred infrequently because we were only able to keep a limited number of dogs. Our dogs were always kept as part of the family so were never re-homed therefore limiting the number of times that we were able to breed. We both joined our local dog club and I ended up as secretary and Tony as one of the main trainers. We are also heavily involved with the Terrier Club of South Wales. We are both Championship show judges, and we have both judged in Russia. Tony is Chairman of this Club and I am Treasurer, apart from the dogs Tony is a staunch supporter of Cardiff City Football Club, I am into Crafts and enjoy making greeting cards with Kerries on. We both enjoy caravanning with the dogs during the summer and stewarding at some of the Championship shows.’

Vice Chair: Mr Donald (Don) Munro. Don and the late Pat Munro have been showing since the 1960’s and we’ve jointly done their profile for our website. Here’s few words from longstanding former KBTA Secretary and Dog World Breed Columnist Pat Munro who sadly passed away on 21st May 2016, ‘Don became involved at the tender age of 6 through a nearby Airedale Terrier breeder, helping out after school & weekends to the extent of litter whelpings and hand-stripping dogs for show! Pat was well into horses. In the 60’s together they showed Airedales (when Pat applied for her Kennel affix of Arkama); but they were drawn to the attractions of the Kerry Blue through Lisa Attwood-Parker (Binate). Together with the subsequent Scottish expat George Wright, Don was considered instrumental by many in altering the pre-70’s trim of UK Kerry Blues to the Anglo-American one we see in the UK ring today. During the 70’s, 80’s & early 90’s Don was a professional handler, sometimes assisted by Pat, making Champions in many other terrier breeds also Standard Poodles. Over the years in a very limited breeding programme Arkama itself has produced well over 50 UK Kerry Champions plus World Champions & numerous Champions overseas. Both began judging in the 70’s at open shows; Pat first awarded CCs in 1983, Don in 1985 and he progressed to include other terrier breeds at CC level and has been judging the terrier group since the late 1990’s.  Each have awarded Kerry Blue CCs at Crufts over the years and at Crufts 2015 Don judged the Airedale terriers. Don is due to judge the group in 2017 at Crufts show, he last judged a group in 2015 and has another group appointment in 2019. Judging for both has included engagements in Finland, Sweden, Spain, Ireland & the USA. For some years Pat was on the Kerry Blue Club of England committee; wrote the quarterly newsletter, cup secretary & P.R. Officer. In the 1980’s after a move south from the Midlands she became a Committee Member of the Kerry Blue Association and later it’s Secretary until resigning in 2014 due to illness. She periodically wrote breed related articles for the two UK dog papers Dog World & Our Dogs, Dogs Monthly, overseas magazines, and 2/3 terrier books. Pat was also Dog World’s weekly breed correspondent for many years, opting out in the early 90’s before being requested by them to take it up again in the mid-90’s, continuing until her simultaneous club secretary resignation. Pat remained a committee member; Don has been the society’s Vice-Chairman for the past several years. Their young grandson recently become involved in exhibiting after periodically attending dog shows in the past 2 years. Don’s other interests are sport on the TV, TV, and more TV.  Pat’s were gardening, making very cute mostly Kerry Blue Terrier stuffed toys and various crafts.’

Secretary: Ms Wendy Phillips brandynkerries@sky.com A few words from Wendy Phillips, ‘We had our first Kerry in the early 1990’s, we started showing her although she was a pet, but she had the most loving temperament. That started us on the showing bug. We bought our next Kerry from a reputable breeder and she was the foundation bitch for our kennel. We had quite a bit of success from our first litter, a couple of RCC’s, and he is still alive at the grand old age of 16. I hold the job of secretary of The Terrier Club of South Wales, and for several years I was the Secretary of the Fox Terrier Club of Wales. Due to family problems we haven’t shown a lot, but I have always been keen on the administrative side of dog clubs.’

Treasurer: Mrs Lyndia Salmon windygap.kerries@btinternet.com A few words from Lyndia and Tony Salmon are above and Lyndia thank you very much for your dedication to the Association and Breed – decades of service that is very much appreciated.

As with all volunteer based organisations people that have dedicated years of service can often go unnoticed and we’d like to take this opportunity to thank everyone involved in the UK Kerry Blue Terrier Association for longstanding service – you are the unsung heroes – well for now anyway! Watch this space you might find a few surprises to celebrate your services to our lovely breed!