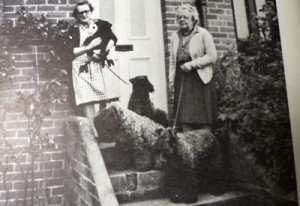 The breed may well go back to the 1870’s. The real origin is difficult, if not impossible to determine, but it is believed that the Bedlington Terrier and Irish Wolfhound were used. These are speculations the Kerry Blue is related to the Irish Terrier, and certainly there are connections to the Soft Coated Wheaten Terrier. Apparently the Kerry Blue Terrier was bred for fighting and was a direct descendent of the Irish fighting dogs of the time.

Shrouded in mystery, legend has it the Kerry Blue Terrier originated from a dog that came from one of the Spanish Armada wrecks on the Irish coast. Popular legend states that a dog of Terrier type was the only survivor from a wrecked vessel off the coast of County Kerry, and stories are this dog killed every dog he met and was much sought after as a sire. Used extensively his progeny spread all over Ireland and a Terrier strain was produced noted for its gameness and fighting tendencies. Another very similar legend is that of the Russian ‘Blue Dog’, a blue dog that swam ashore from a Russian ship wrecked in Tralee Bay, who mated the local bitches to produce the Kerry Blue Terrier. There were many Soft Coated Wheaten Terriers in the 18th Century and it has been claimed that one was mated by a large blue dog that swam ashore after a Shipwreck. The 1970 revised edition of The Observer Book of Dogs states the Kerry was probably descended from the Gadher, an extinct type used by the ancient Irish for sheep herding. 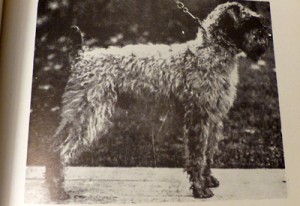 It has also been claimed they are descended from some common stock which produced the Wheaten and Irish Terriers. The colour may have been derived from a cross with another Irish native breed, the Irish Wolfhound. Many were blue and tan and apparently harlequin. Other theories are the Lurchers were involved, being brought in from England. None of these theories can be proven one way or the other.

Used in Ireland as a gun dog, taking the place of spaniel, retriever or setter and doing the work of all three, the Kerry could also fetch and pen very large flocks of sheep on his own. He was also used for herding cattle and guarding stock. As a family companion, he protected property and controlled vermin i.e. fox, badger, rat and otter – all carriers of disease to humans and animals alike. 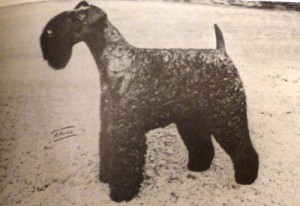 For many years in Ireland he was call the Irish Blue Terrier but in England where he was known as the Kerry Blue Terrier, there was opposition from the Southern Irish fanciers who thought County Kerry did not have the monopoly of the breed.

Established in 1927 as the National Terrier of Ireland, several prominent founder members of the Dublin Irish Blue Terrier Club had arranged a meeting in 1922 to form a Kennel Club for Ireland, resulting in the foundation of the now long established Irish Kennel Club. Henry B Fottrell, one of those responsible in forming the Irish Kennel Club, owned the first Irish Champion – Rog Tailteann – and the first Irish dog of any breed registered with the Irish KC, a dog named Fuamnach. 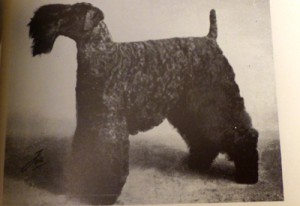 The breed had been a working dog for many years in Ireland, and by 1925 had become very popular in England in the show ring. Irish Kennel Club rules at the time were ‘not cutting of any part of the coat to be permitted’. Field Trials were very important and Irish fanciers were adamant ‘for a working dog the more hair the more protection’. Even today the head trimming derives from the working aspect of the breed, and to quote from J.W. Cummings ‘Abnormal length of hair hanging over the eyes and falling from the chin, gives them a wild appearance’. In England we were not required to work our dogs to gain their title, and in the early 1960’s the Irish K.C. rescinded the 1926 rule, and field trials for Kerries were no longer necessary for a championship title. 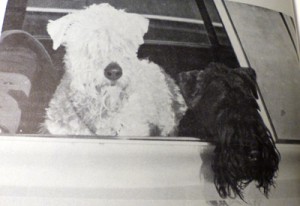 There was discord in the early years over trimming, with much opposition from Ireland on this aspect. Mrs Casey Hewitt, who originally came from Tralee, was one of the original fanciers instrumental in introducing the Blue to the English public, and one of the earliest to exhibit in England, where the breed was first shown at Crufts in February 1922.

J.W. Cummings, who with his wife bred the first English-bred dog Champion Usna O’Rom, also said of the breed, ‘His adaptability to all kinds of sport is marvellous. It is however, as a watchdog, a friend, and companion, that he is par-excellence. He can be trusted with the smallest child; indeed, he seems to have a peculiar love for the latter, and his faithfulness to his master is unsurpassed.’

Another controversial subject in the early 1900’s and even a little nowadays, was colour. One early opinion being ‘The truth undeniably is that pigmentation of the Blue is imperfectly understood by the English breeders, who in mating their bitches give consideration to make and shape and trust to luck in the matter of colour’.

It has been stated a dog called ‘Merry’ in Ireland around 1900 appears to have had a large influence in colour, but we cannot find any details of ‘Merry’ to refer to. If anyone reading this has information on ‘Merry’ we would be delighted to hear from you. 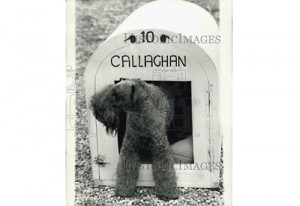 In the early days there were quite a few black and tan puppies, something not seen for some years now, but generally many fanciers would dispose of these at birth. Quoting from one article ‘All shades of blue from dark to light blue are allowed, and what may appear black to the public may be dark blue to the judge who is nearest to the dog. Colour has always been a mystery as two silvers can produce very dark ones and vice versa’.

One early Irish Show observation reads ‘Colour is much more uniform, a dark steel blue prevailing, and coat of course generally abundant. In Ireland we place type predominant. To my mind type is inseparable from character, expression and carriage. The texture of the coat was required to be soft and wavy, harsh coats were being heavily penalised. From all reports soft wavy coats were plentiful and remarked on frequently’. 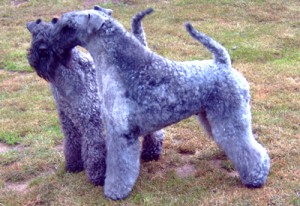 During the World War years and for a while after there was a shortage in both Ireland and England of stud dogs, which meant breeding suffered and during the World War the breed’s services were used for guarding aerodromes, prisoner of war camps and working parties.

And finally! They’ve featured in the Ashes too! Here’s a snippet from yesteryear with true gamesmanship ‘Australia’s Test batsmen, battling at the Oval against the superb England fielding which has helped to win back the Ashes, found themselves unexpectedly up against four more short legs – belonging to a hairy spectator who invaded the pitch and stopped play before he was caught – literally – by fast bowler John Lever. Do you need a mascot, Kerry Packer?’ (Kerry Packer 1937-2005 Australian Media Tycoon) 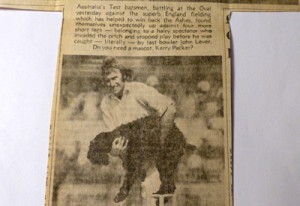 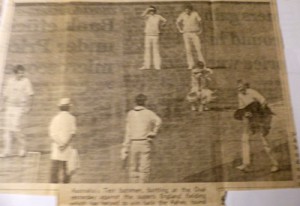