Don Munro phoned me on Saturday with the sad news that Pat Munro had passed away. It was a great shock and very sudden. Pat owned the Arkama Affix which is well known throughout the world. Her Arkama dogs are found in the pedigrees of many kennels both at home and abroad. The foundation bitch for the Arkama Kennels was Downrite Denham Blue, she produced Arkama Denhams Follow up. Altogether the Arkama Kennels produced well over 50 UK champions plus World Champions and numerous Champions overseas and this from a limited breeding programme. 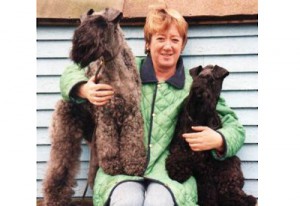 Pat was the secretary of the Kerry Blue Terrier Association for many years, but resigned in 2014 due to illness. At the same time she resigned at the Breed Correspondent for Dog World a post that she had held for many years. She first awarded CC’s in 1983, and has judged in Finland, Sweden, Spain, Ireland & the USA. She periodically wrote Breed articles for both Dog World and Our Dogs. She was very well respected in the breed and will be sadly missed by many. Pat had just had the all clear after suffering her second bout of cancer, she found the treatment very hard and was still suffering the side effects, but was hoping that her life would get back to normal now. At the Birmingham National she was in good spirits, but she was having a problem with her legs and was in a degree of pain with them, but was proud of her grandson’s handling of their young bitch.

I know that I will miss her, as we used to have many long conversations on the phone, covering a huge range of topics. Although I had known Pat for many years, and sometimes we had a difference of opinion, we only really got very close after I joined the Kerry Blue Terrier Association. Although sometime we agreed to disagree we had quite a few things in common. Pat was outspoken and called a spade a spade, she had no time for time wasters, but was always ready to give advice to newcomers to the breed. We were both interested in Craft, her Stuffies (model handmade fur Kerries) as she called them, were always a firm favourite when she brought them to Crufts to sell, and I know she was trying to fulfil orders at the time of her death. She was also a creative modeller of Kerry ornaments, and also she was a very talented painter. I have a few samples of her work at home. We also had a love of gardening (although Pat was more knowledgeable about the Latin names than I was) and would discuss what flowers to plant and what we liked. At one point Pat wanted a purple Rhododendron for a particular part of the garden, I picked one up for her, with a purple tag, but her son told her the tags don’t always match the flower. We waited 2 years for it to flower only to find out it was pink. Pat was always generous with her plants, and I have several in my garden that Pat gave me, and she also supplied some to Margaret Bradley. When she wasn’t with her dogs she spent a lot of time in the garden and it gave her great pleasure. The last couple of years she enjoyed going away in the caravan, and we always parked next to each other, and several times she and her grandson Albie came with us on trips. She was so glad that Albie was showing an interest in the dogs, and she hoped that he would continue to show their young bitch.

I know Don and her sons will find it difficult with Pat gone, as she was the rock that they relied on, and I’m sure that they will be really missing her. My sympathies go out to them, and I know I will miss her company and the talks we used to share.

Pat Munro (Arkama Kerry Blue Terriers) was a dear friend. We were shocked to hear of her sudden passing at the weekend.

Pat started in dogs in 1968… a lifetime ago, and by using an anagram of the name of her first show dog (an Airedale terrier) she registered the now famous Arkama affix. With a limited breeding programme, she went on to become a hugely successful breeder with over 50 Champions at home and abroad.

Along with her husband Don they became a formidable force and in 1979, a defining moment in Kerry Blues came when Don handled John and Wendy Streatfield’s Ch/Am Ch Callaghan of Leander to Best in Show at Crufts.

During Ron Ramsay’s early days of showing, Pat and Don gave him enormous support and friendship following his own bereavement at that time…

Pat’s father was a talented artist, and she really inherited that artistic flair. In the years before handmade cards became trendy…Pat produced the most beautiful hand painted greeting cards which were a delight to receive. She produced painted models and handcrafted gifts which she donated to the various Kerry Blue Breed Clubs to help raise funds.

Over the years, Pat was active as secretary of the Kerry Blue Club of England and later the Kerry Blue Association, she was an international Championship Show Judge and a regular breed note correspondent for both papers over the years.

I met Pat in the late 80’s, she was already successful in her breed, a hardworking mum who always managed to look glamorous in the show ring. I enjoyed her company on a number of trips to USA to the Montgomery Weekend…between shows, we spent hours trying on suits in Macy’s!

Pat mentored many newcomers to the breed, she actively promoted the ‘social side’ of dog showing organising the clubs dinner and dance for many years and little get togethers after judging…always with a warm welcome to all and plenty of food and wine!

She had her share of hard times amongst the good, and bravely battled cancer twice and won!

Most recently they had been supporting their grandson Albie, who has caught the ‘showing bug’…

To Don and the boys…we extend our deepest sympathy and we hope that little Albie continues to follow Pat’s footsteps.

If there really is an ‘Up There’….Pat will be in the great company of her very dear friend Judy Averis with a nice glass of red… 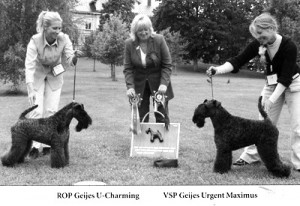 You Will Be Missed – God Bless You